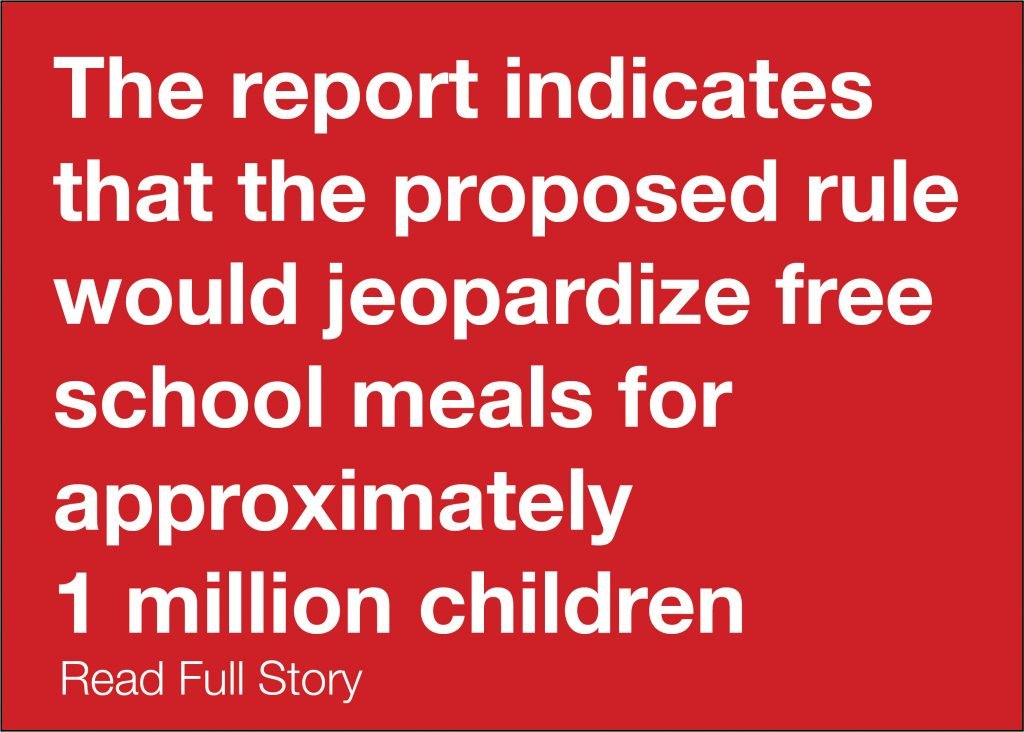 Washington, DC – November 24, 2019. The Trump Administration’s recent proposal to cut SNAP food benefits is the third round of benefit cuts within the past year. The proposed rule “Revision of Categorical Eligibility in the Supplemental Nutrition Assistance Program (SNAP)” would gut states’ Broad-Based Categorical Eligibility (“Cat El”) options which eliminate SNAP asset tests and use a higher income test to serve more working households that have significant expenses for shelter and childcare. According to the United States Department of Agriculture (USDA)  initial Regulatory Impact Analysis, the proposed rule would eliminate SNAP benefits for 3.1 million households nationally.

On October 15, the USDA released a secondary informational analysis of the proposed rule, this time, finally including the impact on access to the School Breakfast and National School Lunch Program. This report indicates that the proposed rule would jeopardize free school meals for approximately 1 million children. The Congressional Budget Office (CBO) had also highlighted the impact on free school meals of these proposed legislative changes to SNAP Cat El in the 2018 Farm Bill, to Members of Congress prior to USDA.  . Congress has already rejected efforts to gut Cat El during its consideration of the 2018 Farm Bill, thus USDA rulemaking is an attempt to sidestep Congress and is outside USDA’s authority.

The USDA has displayed a lack of transparency and delays in disclosure to the public which hinders appropriate engagement and understanding of these proposed changes. The Department waited more than 75 days after it published the proposed rule and 16 days after the initial 60-day comment period had closed to release its analysis of the impact on access to school meals, yet has provided the public only 14 days to review and assess the Department’s analysis.

The American Muslim Health Professionals (AMHP) strongly opposes this proposed rule that would jeopardize many schoolchildren’s access to free and reduced school meals, while at the same time attempting to override Congress’ rejection of the proposed changes.

If you would like more information about this topic, please email Lujain Al-Khawi, AMHP Health Policy & Advocacy Intern at advocacy@amhp.us.